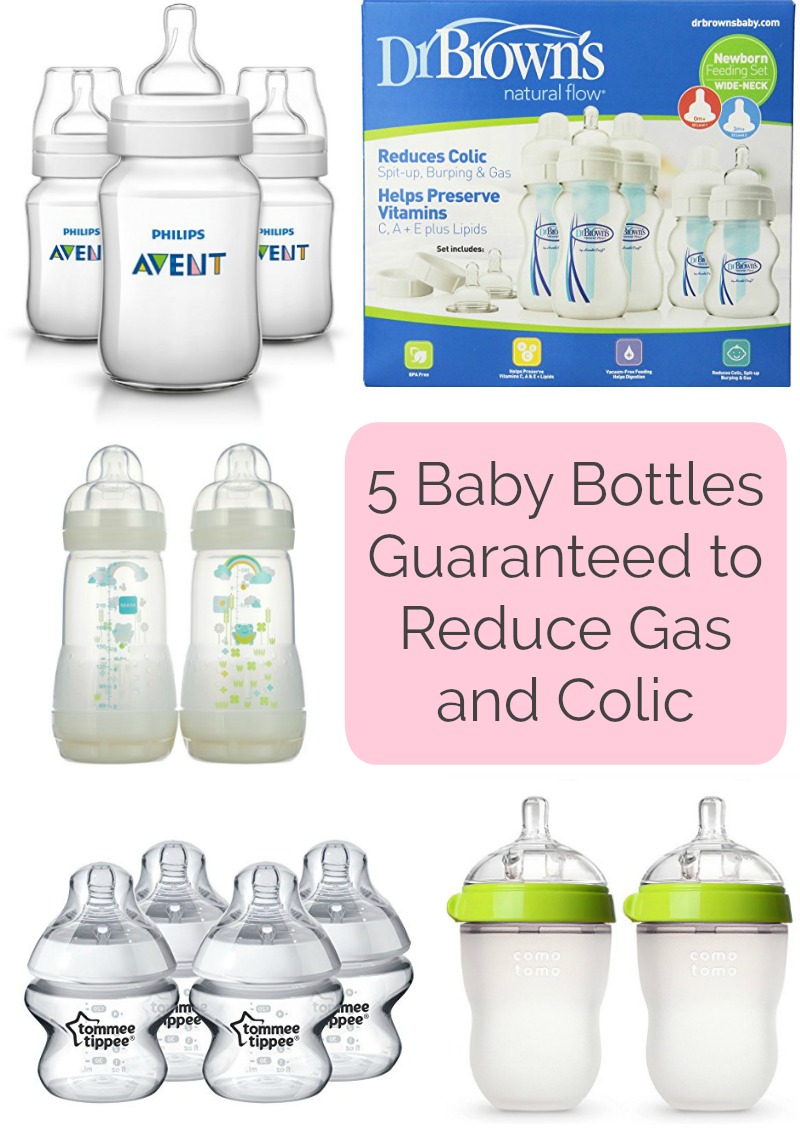 All parents know how hard it is to see that your baby unwell because of colic. This problem affects most babies and it is caused by the air that is swallowed when the baby is bottle fed. The air is then stuck in his or her tummy and it can become  very painful, causing the baby

Fortunately, it has been observed that parents can use certain baby bottles to reduce gas and colic. In this article, we are going to show you the best of them. These 5 baby bottles are the best on the market for this problem.

This is the best baby bottle to avoid gas and colic. Parents have mentioned that it really worked for their babies. 5 stars reviews say that this baby bottle is the best for this common gas problem. Dr. Brown bottle comes with an innovative internal venting system which helps release air pressure and it moves the air from the top to the bottom of the bottle.

The natural flow baby bottle also helps your baby get more vitamins because it preserves the nutrients. Unlike many other colic and gas baby bottles, this one has the venting system in the nipple collar instead of the nipple. This makes it easier to vent the air and stop it from being swallowed by your baby.

The baby bottle from Philips Avent is also on top when it comes to preventing colic and gas. This bottle is also great because it has only 4 simple pieces that can be used to other bottle from the Avent line. All bottles in this line are BPA free.

This baby bottle is recommended by experts because a test has shown that it reduces the risk of colic and gas. Its main anti-gas feature is a vent in the nipple that releases the air in the bottle instead of letting your baby swallow it. Philips Avent Anti-Colic reduces the nighttime fussiness by more than 60%.

Another great baby bottle that reduces colic and gas is the MAM anti-colic. This bottle is great because it has the air vents at the bottom of the bottle. This guarantees that your baby won’t swallow air when they eat their milk. Also, the silicone nipple mimics the natural nipple which makes it easier for mothers to bottle and breast-feed.

Studies also showed that more than 94% of babies accept this bottle. Users have reported that it reduces colic and gas. Because of the separate air vent, you will need to clear more parts compared to other compact bottle.

These baby bottles are unique because they are made of flexible silicone. This way, it can be easier for your baby to get used to them once you decided to switch to bottle feeding instead of breast feeding. Because of their material, the Comotomo bottles permit your baby to eat uninterrupted even when the pressure is not released.

They are easier to clean and store and they come with slow-flow nipple included. The nipple also has a dual anti-colic vent that allow the air to be relieved inside the bottle. This makes it easier for your baby to eat without swallowing the air.

Another great bottle that reduces colic and gas is the Tommee Tippee. This bottle comes with a low-flow nipple that will help your baby eat slower and will lower the risk of colic. Also, the Stage 1 nipple have a valve that allows the pressure to be released. It has a wide base which helps you baby eat better.

The nipple mimics breastfeeding because it is made of flexible silicone. Another great feature of the bottle is that it has accurate volume markings that make it easier for you to see exactly how much your baby ate. Its shape also makes it easy to clean and store the bottles.

These are just a few of the anti-colic bottles available on the market. Choose the best one for your baby to avoid colic and gas. Remember, a happy and healthy baby means a happy mother. These bottles have been tested by experts and all of them showed that they reduce the risk of colic and gas.