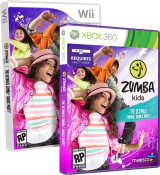 Zumba® Kids is expected to launch this holiday on Kinect™ for Xbox 360® and Wii™. Featuring a range of dance styles, creative mini-games, customization and chart-topping hits from Justin Bieber and Willow Smith, this engaging interactive experience is packed with gameplay to keep kids moving!

Based on the global dance-fitness brand that pioneered “exercise in disguise,” Zumba® Kids brings kids aged 7 to 12 together to play and express themselves with routines and activities custom-designed for them. Kids can build self-confidence and discover new rhythms as they move to over 20 different dance styles—more than any other kids game! With 170 million children under 18 now estimated to be overweight*, Zumba® Kids is an ideal solution to get kids off the couch with motion-based fun that helps them stay healthy and fit.

“Zumba’s benefit-driven brand pillars are infused throughout their kid-focused specialty program that lends itself perfectly to a fun and differentiated interactive game,” said Jesse Sutton, chief executive officer, Majesco Entertainment. “We will continue to explore new ways to expand our leading game franchise across demographics and platforms as we identify promising market opportunities.”

“Zumba® Kids makes exercising fun and is a step in the right direction toward combating and preventing childhood obesity,” said Alberto Perlman, co-founder and CEO of Zumba® Fitness. “With millions of children facing weight issues around the world, we are introducing a high-energy video game to the market that we hope will help decrease the global obesity epidemic and provide kids with a new opportunity to move and get fit. It’s the perfect opportunity to replace snacking on chips and soda with something healthy and fun.”

Developed by Zoë Mode, Zumba® Kids is expected to release this holiday on Kinect for Xbox 360 and Wii™. For more information on the game, please visit zumbafitnessgame/kids.