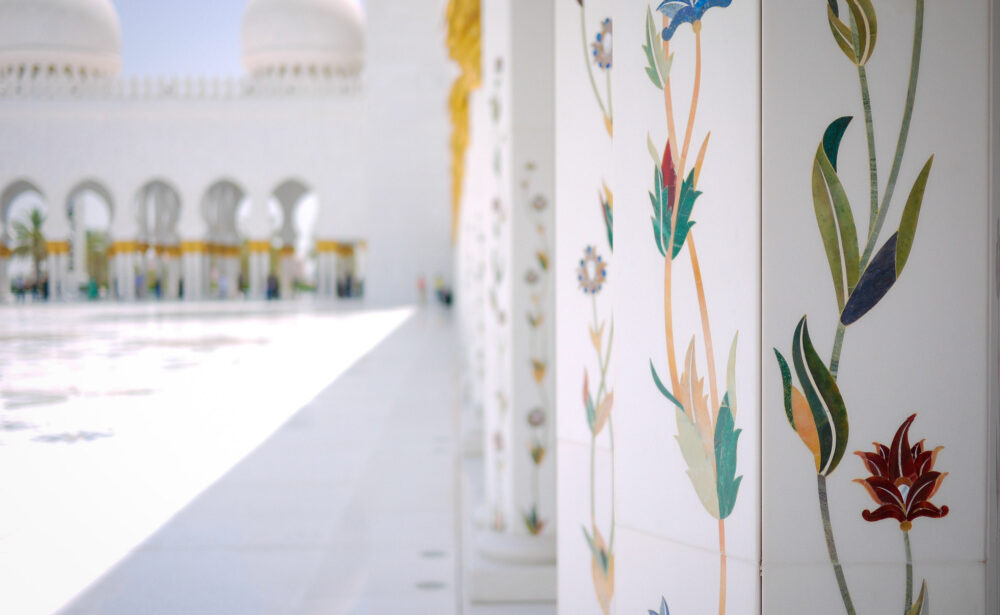 Couples looking for the ultimate getaway should plan a Middle Eastern holiday to Abu Dhabi, the capital of the United Arab Emirates and a popular tourist destination. Abu Dhabi was hailed in 2007 by both CNN and Fortune Magazine as the world’s richest city and after one visit we can see why. Be sure to add an experience to Abu Dhabi’s invigorating desert climate to your travel bucket list. While you are there, be sure you visit the following six tourist attractions.

Be sure to make this imposing and iconic structure one of your first stopovers when you reach Abu Dhabi. The ornate Sheikh Zayed Grand Mosque is the world’s sixth largest mosque and a beautiful sight to see. It is constructed out of natural materials, including marble, gold, crystals, ceramics, and semi-precious stones. The Sheikh Zayed Grand Mosque is easily accessible via the public bus network making it a top pick for attractions in the AUE area.

Located near the Sheikh Zayed Grand Mosque, Khalifa Park is an exquisitely designed tourist attraction featuring a museum, an aquarium, and a train. Visitors can expect formal gardens, carnival rides, and live performances at this major Abu Dhabi landmark. Be sure to set an entire day aside to take in all this location has to offer.

Couples looking for the perfect outdoor site, should see a well-preserved Bronze Age site at Al Hili Archaeological Park. Dated from 2,500 to 2,000 BC, the archaeological park’s remains include tombs, early human settlements, and an Iron Age underground vertical shaft that served as a water supply system. Al Hili Archaeological Park is also popular for its picnic-friendly gardens, water fountains, and play area for kids. Ali Hili is as breathtaking as it is an educational must when vacationing in the United Arab Emirates.

Abu Dhabi is an architectural paradise that is home to some of the world’s most impressive skyscrapers. Built in a postmodern architectural style, the 1,063-foot-tall, The Landmark is the tallest building in the city. The building is both a commercial and residential spot to the locals. There are, however, two levels of restaurants for you to choose from as you go about sampling delicious Middle Eastern cuisine. To explore all the tastes of the local scene click here and be ready for an explosion of flavors native the area.

If you are splurging on your holiday vacation to Abu Dhabi, then stay at the five-star Hyatt Hotel in Capital Gate, a one-of-a-kind engineering marvel that features an organically shaped building that is gracefully inclined 18 degrees to the west. Dubbed as the Leaning Tower of Abu Dhabi, the spectacular Capital Gate is also home to Rayana Spa, a relaxing haven that overlooks the city. Rayana Spa features a suspended pool and a whirlpool. You should also try Capital Gate’s famous Sky Brunch, where you get to indulge in Eastern Mediterranean food while taking in the sights from 80 meters above the ground.