We are a family of foodies.  I am not, however, a trendy food.  I don’t go out of my way to find the latest “thing”, I don’t like kale, and I don’t replace my croutons with quinoa and chickpeas.  I was a raised as a chicken-and-potatoes midwestern girl and that’s stuck around now that I’m cooking for a family of my own.

Now, not going out of my way looking for those sorts of foods doesn’t mean I won’t try them when they cross my path.  So what is quinoa?  It’s a grain plant, but we actually eat the seeds.  We prepare it and treat it like a grain though.  It’s become a food trend in the US due to its high amount of protein and magnesium among other minerals.  Quinoa as a cereal is also a great option for people with conditions like Celiac’s Disease who may need to avoid gluten. 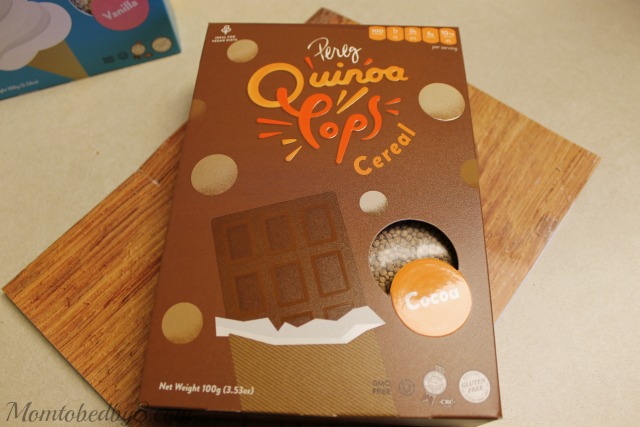 Pereg has a lot of products that include quinoa, spices, and toppings.  One of their products, Quinoa Pops Cereal, was recently sent to me in four flavors so my family could test it out.  Like the rest of the product line at Pereg, this cereal is considered gourmet.  Each box is good for about 4 servings and costs around six dollars.  It is therefore a little more expensive per ounce than cereal at the grocery store.  (About twice as much as the typical generic kids’ cereal at Kroger).  It was still tasty. 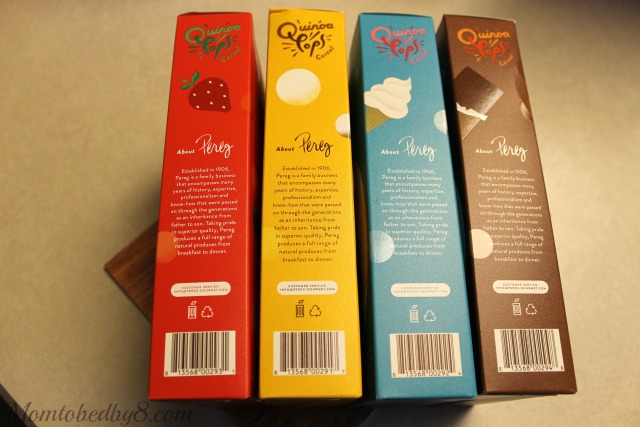 The Quinoa Pops cereal has very few ingredients, which for me is always a plus: quinoa, sugar, and whatever flavor it is.  The flavors they’re currently offering are original, vanilla, chocolate, and strawberry.  It tastes just like my kids’ cereal, but has a slightly chewier texture to it.  The strawberry also has a little coloring added to it, but it’s a cochineal dye.  (Spoiler before you look that up on Google because it’s familiar: It’s made from beetles.  Totally considered safe, but good to know if you’re a vegan.)

Quinoa is one of the world’s easiest foods to grow, so these are able to be made 100% GMO free, if that’s something that your family watches in your diet.  The fact that they’re about 100 calories per cup (before milk) means they’re good as an addition to things like yogurt and parfaits as well as being eaten like normal cereal.

I could personally have done with less sugar in them, but I don’t know that my kids would have eaten them with any less.  The “original” flavor of Quinoa Pops is nothing but quinoa popped with pressure and heat (like popcorn), with no flavors, colors, or sugar included.  That would be my best bet for creating recipes with, but my children wanted nothing to do with it unless I mixed in a little of another type first.  I did use the vanilla and original together to trick them into eating the original.  That cut the amount of sugar they had in half without taking away too much of the taste.  At least not enough for them to notice.  Kids: 0, Mom: 1.