Team Umizoomi features a tiny team of superheroes, Milli, Geo and Bot, who use their mighty math powers to help little kids solve big problems. The series combines action-adventure missions with an interactive math curriculum designed to help kids develop self-confidence in their math abilities and appreciate the many ways in which math shapes their world. The Umi Team is not complete without their Umi Friends (home viewers), who help the team along the way while practicing various math skills. Set to a soundtrack of preschool-friendly pop songs, the series is designed to build upon preschoolers’ conceptual understanding of math as they are exposed to core mathematical concepts like numbers, counting, computations, measurement, patterns and shapes. 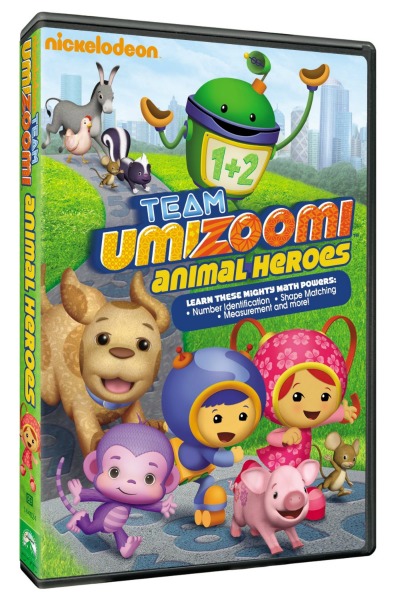 Join Milli, Geo and Bot on four fantastic animal missions in Team Umizoomi: Animal Heroes. Help Team Umizoomi get Purple Monkey to his new Monkey Jungle home at the zoo, rescue Buster the dog at a construction site, fix the Cuckoo Bears’ clock, and find all of Farmer Dan’s missing animals! Preschoolers will learn many math skills, including counting, patterns, measurement, and more! For a limited time only, find free Team Umizoomi Activities inside the DVD for on-the-go math problem solving!

Purple Monkey Mission
There’s a new animal coming to the Umi City Zoo—Purple Monkey! But when Purple Monkey is accidently dropped into the icy cold Penguin House, it’s up to Team Umizoomi to help him get to the Monkey Jungle!

Buster the Lost Dog
When Buster the dog accidentally jumps into the back of a truck that carries him far away, it’s up to Team Umizoomi to help rescue the puppy and bring him back to the park!

Cuckoo Bears
The Cuckoo Bears, a band that lives inside the Umi City Cuckoo Clock, lose the gears that give them their power! Will you help them find and fix the gears before the clock strikes 12?

Animal School House
Farmer Dan’s animals are missing from his farm! Join Team Umizoomi as they search for missing mice, chickens, pigs and one stubborn donkey!

Giveaway ends September 11th at 11:59pm, open to US residents, ages 18+. To enter please use the Rafflecopter form below. Good luck.