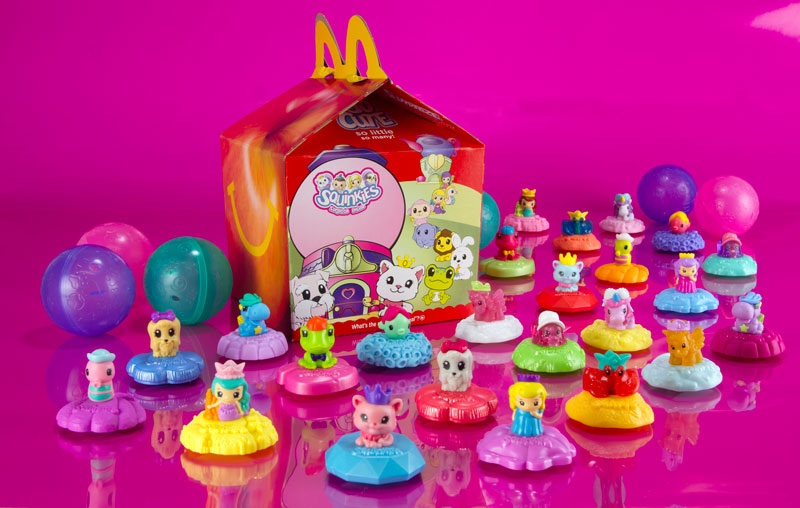 Beginning late this month Blip Toys’ popular mini-collectable, Squinkies, will be the featured girls toy during a four week release in the new McDonald’s Happy Meals.

Squinkies are 1” squishy, squashy collectible toys that each come in their very own bubble container. Since its launch in 2010, Squinkies has earned numerous awards and continues to be a white-hot collectable phenomenon available in over 100 countries worldwide.

Blip Toys and McDonald’s have partnered to create 32 unique collectible Squinkies toys, each on their own rocking base, for this Happy Meal promotion. Like the original Squinkies, every toy will come in its own specially-sized, themed bubble that kids can pop open to reveal the “surprize inside.”

There are four different themes which include zoo, fantasy, pets and ocean. Kids can collect elephants, kitties, mermaids, and more, as well as four exclusive rare Squinkies characters designed specifically for the McDonald’s Happy Meal.

Along with the Squinkies toys kids will receive mCodes, unique codes that can be used on HappyMeal.com to unlock virtual Squinkies Surprizes. The Happy Meal website will also feature a Squinkies matching game, hidden Squinkies characters, and downloadable activities.

“We’re pleased to have Squinkies be a part of McDonald’s commitment to raising nutrition awareness among children and parents by partnering with them as a featured toy during this four week Happy Meal Promotion” said Bill Nichols, President/CEO of Blip Toys, LLC.

Beginning this month the new McDonald’s “Eat Smart, Play Smart” campaign will focus on inspiring kids to maintain healthy diets while encouraging them to get up and play.

Squinkies will be the featured girls toy for a limited time only. They will be available inside of McDonald’s Happy Meals until April 26th.