Artists and crusaders come in all shapes and sizes — and ages, it appears.

Seven-year-old Evan Moss is both.

Already an accomplished author on the CreateSpace self-publishing platform with his book, “My Seizure Dog,” Evan’s cause was himself. He and his family needed to raise money to purchase a specially-trained dog from the non-profit 4 Paws for Ability organization, to secure a constant companion to act not just when Evan was having an epileptic seizure — usually in the middle of the night — but sniff it out beforehand and alert others to Evan’s side.

Now that Evan has raised enough money for his own dog — and helped support the fundraising efforts of at least three other families — he wants to raise more money to help other children acquire the seizure dogs they need. You can help! People Magazine is holding a “Readers Choice Hero” competition that awards the grand prize winner with $10,000, which Evan will put towards helping another child acquire their seizure dog. You can vote by clicking this link

Voting ends Oct. 13 so your quick attention to this is really appreciated. 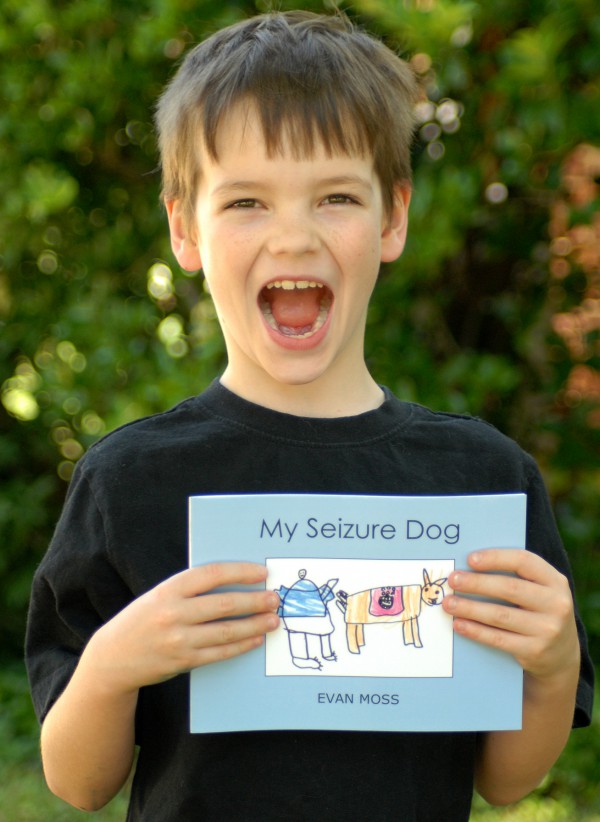 He didn’t set out to write a book. After all, he’s only seven. But the application for the dog required Evan speak on his behalf and he did so with a hand-made, self-illustrated book, the kind he learned how to make in his first grade class. Evan says he wants to be a famous author when he grows up. It seems he’s already on his way.

The cost of the specially trained seizure dog, a Labradoodle, is $13,000 and the family knew they had to get creative to raise the money. Publishing Evan’s book looked promising and the CreateSpace platform provided the family with a quick, easy and affordable way to get the book out — without investing in inventory — so they could get cracking on chipping away at that hefty price tag. Little did they foresee that Evan’s story would hit a responsive chord with nearly everyone who heard Evan’s story. Within one month of the book’s publication through its availability on amazon.com and book signings at a local coffee shop in his hometown of Alexandria, VA, Evan’s $10 book drove in substantial sales and donations so the Moss family could acquire the dog Evan needed and they could help others, too. Evan’s dog is being trained and he’ll get his new best friend — after his big sister, Aria — next July.