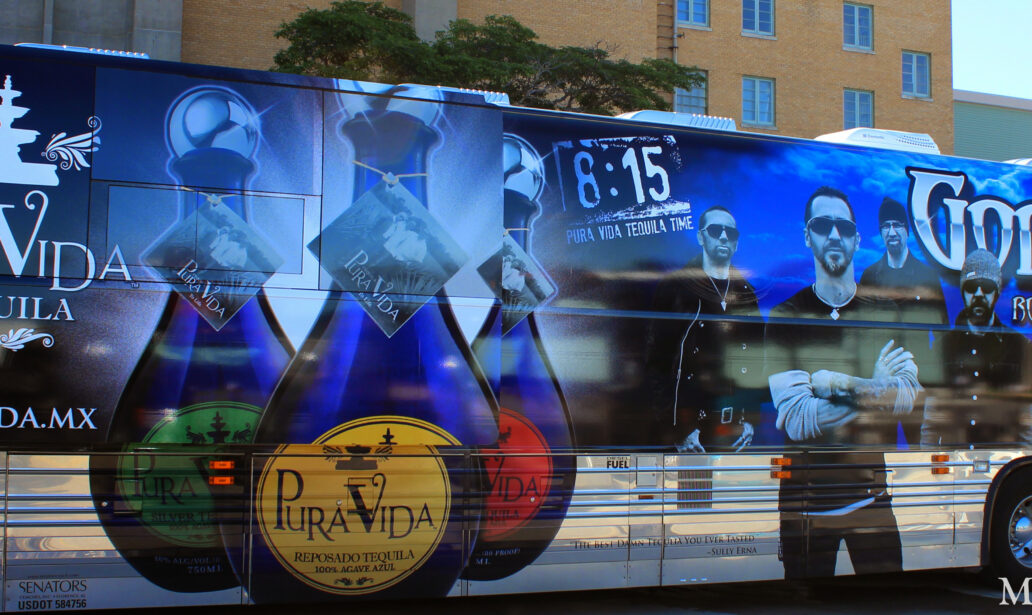 On Saturday, September 6, 2014, I had the great opportunity to attend the Rockstar Energy Drink Uproar Festival in Sioux City, Iowa thanks to Pura Vida Tequila. This adventure included personal interview and visit with the featured band, Godsmack. Many of us 30 something rock lovers know this band by name and I as well as my cameraman, Greg L, was anxious to chat with them one on one.

The Festival started off around 1pm with a group of bands performing outside. This included a few well known bands such as Sons of Revelry, Tattered, Within Reason, Escape the Fate, and Buckcherry. As you can see below, it was a packed crowd outside and the bands knew how to put on a great performance bringing both current and new fans to raised hands with screams of approval. Of course like many, I had my favorites of the day. Both Escape the Faith and Buckcherry put on an amazing performance that myself and the fans immensely enjoyed.

Once Buckcherry finished the last show outside, I had the opportunity to make my way to the Pura Vida Tequila Party bus where not only would I get to meet Godsmack but I would get to enjoy some great Tequila while I was there. Although my first thoughts on this whole ordeal was that this would be some big brand company just trying to get as much media attention possible aka “just another Tequila”, but once I made my way on to the bus and had my first taste of Pura Vida that all began to change very quickly. Even the bottle presentation show star quality and the contents inside were well even better.

The first drink I got to “try” was called a “Sully Smash”, and it was a smash hit with me. While enjoying my drink, I had the opportunity to speak with Stewart Lawrence Skloss, Founder and Chairman of Pura Vida Tequila. Stewart explained the passion he has for making the best Tequila in the world. From using Agave that is harvested when the sugar content is highest, instead of just when it is big enough. Using 100% Blue Agave that is triple distilled to ensure a pure and superior product.

Stewart explained that the goal was never to make just any Tequila, but to make one so good that nothing else, regardless of price, could compared to it.  I even got to try some of the Pura Vida straight, and I must say I was amazed how smooth this was. Now I have always enjoyed a good stiff drink but this one was by far the best I have tasted in my many years. Instead of the usual quick down the throat, this was a Tequila you would savor like wine. It was smooth in your mouth with a great taste and none of the “I will regret this tomorrow feeling” to it.

After our Tequila education talk with Stewart Lawrence Skloss, Godsmack arrived at the bus for their 8:15 shot and to sign a few autographs.

Sully likes to think of 8:15 as the new 4:20 and I couldn’t agree more. Pura Vida in Spanish means “Pure Life”, and 8:15 is about celebrating today and living for tomorrow.  For no matter what happens today tomorrow will come and today will be the past.

After photos, autographs and down to earth conversation with the band, it was time for us to make our way inside to watch the real show begin. Stewart was kind enough to bring us through the backstage allowing us to see the bands perform from both sides of the stage. For those of you who have never been able to see a concert from both behind the scenes and from up front, this is an amazing experience all of it’s own. The view from behind the band allows you to see for yourself what their performance does to the crowd. You get to see the energy as it spreads once the music begins to play. You get a real feel for why the bands preform night after night for their fans.

I couldn’t pass up a chance to take a picture with Stewart and Cassandra, as they proved to be gracious hosts, great people all around, and producers of the best tequila I ever had. We hope to see them again in 2015!

Of course the highlight of the night was the headline performance of Godsmack.  The guys put on a kickass show and even when we thought the night was done, they came back out for an encore performance with the crowd cheering them on.

Honestly, I have never been a big concert goer (unlike my wife who really wanted to be here). In fact, this was the first time I have seen Godsmack in concert. Like most people of our generation, I have enjoyed their music for years and I have to admit this was one amazing day. A moment that I will tell my grandchildren about one day and one my wife and daughter are already extremely jealous of.

Between the music, people, and tequila, I couldn’t have asked for a better experience.  I will be looking forward to the next opportunity I have to meet with Stewart and seeing much more from Pura Vida Tequila.

Make sure to share your 8:15 Tequila time with Pura Vida using the hash tag #815tequilatime