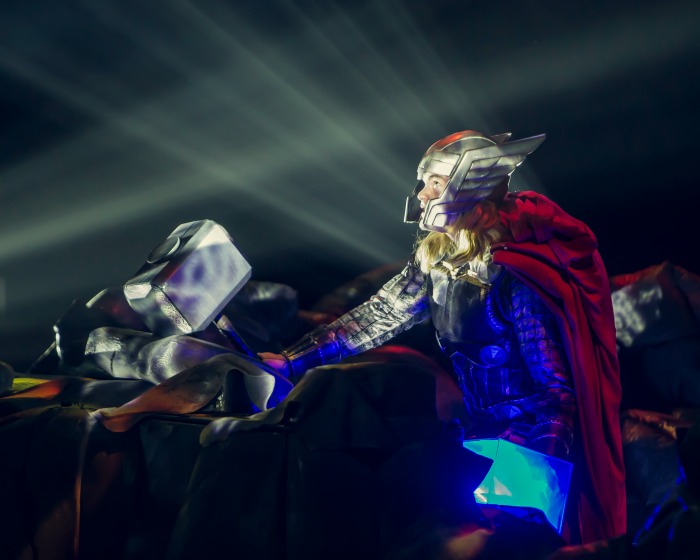 Feld Entertainment, Inc., the world’s leading producer of touring live family entertainment, recently went live with what many are calling  “the most ambitious live show in its history”. When we got the last minute invite to view the very first public show for Marvel Universe LIVE!, I immediately went back to a fond memory during Monster Jam when my boys got their first sneak peek at this new show featuring many of the Marvel characters ever assembled in one production, this high-caliber arena spectacular will put fans right in the middle of one of the most electrifying battles between good and evil ever conceived. Produced by Feld Entertainment, this  we have all come to love and even one that was brought to life with the very first time ever. 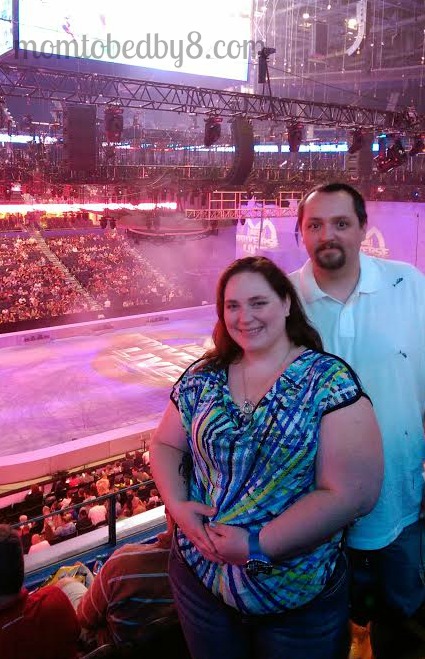 Now the technical details: The Marvel Universe LIVE! tour makes its 85-city debut in July in Tampa, FL, followed by the world premiere at New York City’s Barclays Center on Wednesday, August 13. Which is where you can see my hubby and I smiling so proudly above. Yes, I know I was suppose to take the boys but my superhero, moving loving man decided he wanted to attend one of my press trips for the very first time. What a wow moment! The tour’s first leg of its North American tour will feature stops in Washington D.C., Philadelphia, Nashville, Miami and Atlanta, among many others and of course, tickets for Marvel Universe LIVE! are on sale now.

Marvel Universe LIVE! presented an original story that brought together 25 Marvel characters together on stage for an epic quest including our favorites: Captain America, Iron Man, Thor and the Hulk. The story is framed around the battle over the Cosmic Cube, the source of ultimate power and one of the most feared and coveted treasures in the Marvel Universe, that has been shattered into pieces by the Mighty Thor in order to prevent it from falling into the wrong hands. With the pieces scattered across the globe, Thor’s villainous brother Loki devises a scheme to clone its powers, inciting a threat that could not only decimate Earth but also obliterate the Universe.

To defeat Loki, Marvel’s biggest Super Heroes must band together, including The Avengers – Iron Man, Captain America, Hulk and Thor along with Spider-Man and Wolverine, must trek across the globe to retrieve the Cosmic Cube fragments and unite them. As the Super Heroes track the Cube, they will encounter some of their biggest adversaries including Green Goblin, Doctor Octopus, Red Skull, Madame Hydra, Aldrich Killian, Electro and more, in the quest for the very same fragments. These foes have no problem teaming up if it gets them closer to their ultimate goal of world domination.

Though seriously all of that information is standard get to know from the press, but what you want to know is what did I really think of the show and is it worth the $40 to $120 plus ticket price. I am going to flat out say yes and no. It all depends on your reason for attending. Just like with other live shows and even when selecting a film, you have to enjoy the characters, theme and/or actors for the proper experience. Since my entire family are big superhero and Marvel big screen fans, this was right up our alley. 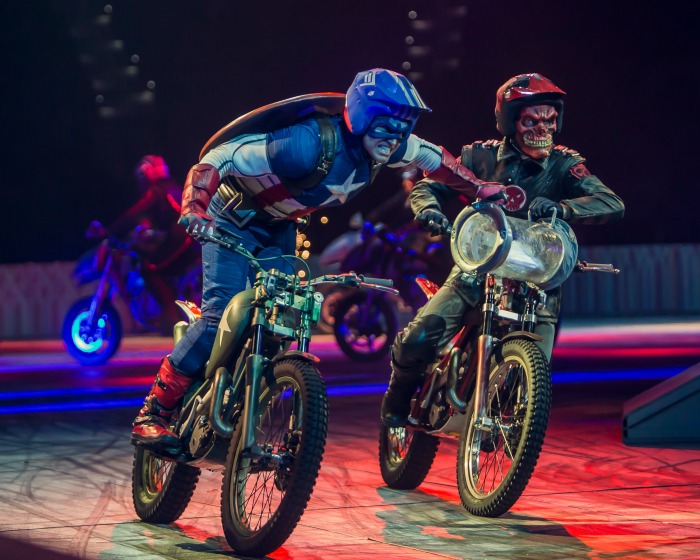 Being that only my husband and I got to see the show, everything I say from here on out is completely from an adult prospective. I imagine a child would have an amazing ahhh effect and no matter what I think overall I will be taking all four of my younger children to see the show in Chicago in 2015. I know without a doubt that they experience will be completely different as our children see the world with rose colored glasses.

The most memorial features of Marvel Universe LIVE! were the video effects and smooth scene change. If you are a regular to these style event, you know that creating the next scene requires pieces and people to be either visibly removed while the show goes on or a curtain close to make the change out. That was not the case here. In fact Marvel Universe LIVE! never stopped moving except for intermission. There was no moment of boy I am getting bored or let me just go take a walk break. You knew in the first several minutes you were not leaving you seat till it was over or you would miss something. 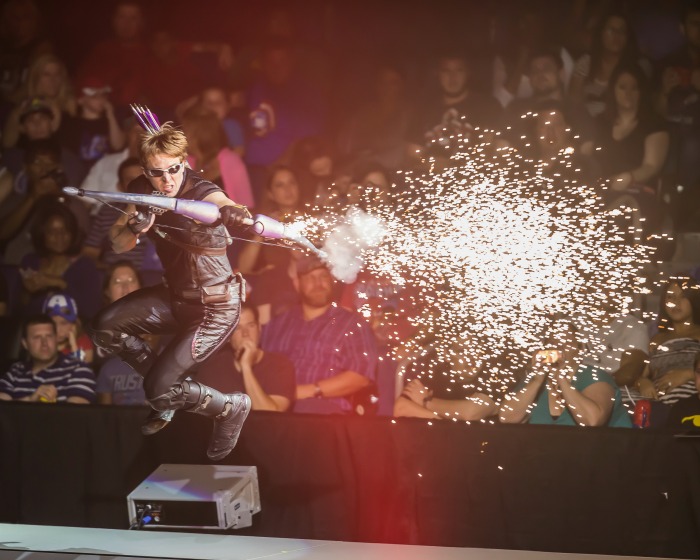 How the scene changed worked to a close observer: As the action moved from one area to the next, it kept the eye well trained and the brain in focus on what was happening while over on the other area of the stage what appears to be smooth running machines would slowly slide into place to allow for the next set to continue without missing a beat. Now it doesn’t hurt that there was a good deal of action and pyrotechnics going on to keep the focus in the area they want it to be directed. Seriously who doesn’t love a big boom and spark! Overall the process was one to marvel at and by far the most well thought out event setup I have seen thus far.

The rolling scenes with transformative 3D projection were inspiring and you would seriously have to see the show to understand what I mean. Though if you have ever been to Disney and experienced Soaring you have an idea of what I mean. Though Marvel Universe LIVE! did it so much better here allowing the audience to travel the globe with the characters using this technique. This gave you the movie theater feeling almost. It brought a bit of smoothness to the show. I was very impressed with this and if nothing else hope the adults who will flock to this event with their amazing children in tow will walk out agreeing that hey, that chic on Mom to Bed by 8 was right; that was really cool! 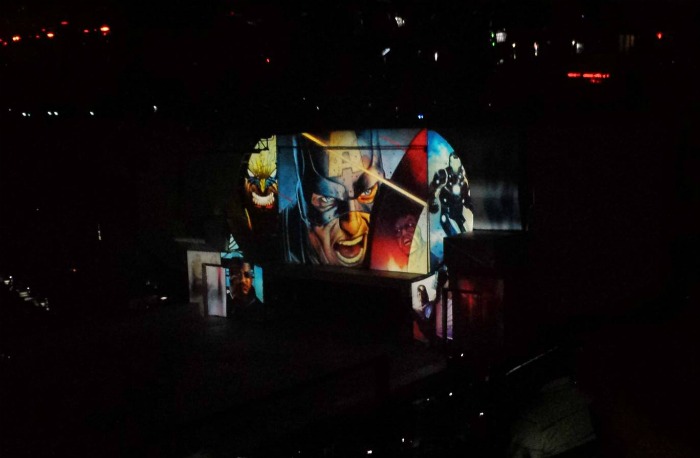 I know that when you see the preview and even this idea of a Marvel Universe LIVE! immediately says action packed and while it was, this was the only area I was meh on. As a close observer, I could clearly see the punches didn’t connect and some of the run around was less than I hoped for. That doesn’t mean the action was lacking as it was steady and very entertaining. Even though I watched a little too closely, many of those sitting by us and visualizing what a child would see seems to be a completely different aspect. To them it was the thought effect more than the actual happening that created that heart pump and clap effect. So I think if you go into on a fan basis instead of the nitpicking media woman, you will get a completely different experience.

As a mom I want to stress, this show is one that I see families going to and it is perfect for the younger audience. No foul language or sexual situations. Even black widow was well covered with her uniform. I give it a big A+ for being PG. The only questionable area of that is the violence and I mean it is a superhero event. You have to have a bad guy as well as a good. 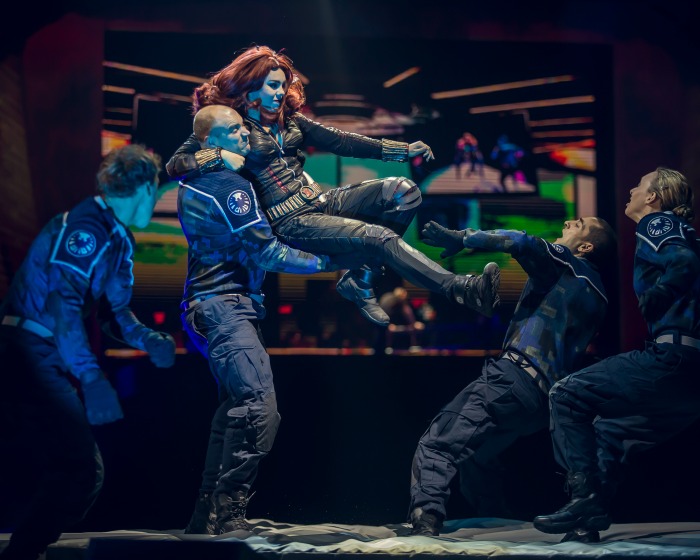 The noise level for an action show was surprisingly right on target. I expected concert loud at times and it was not. The pops and bangs gave you enough to jump on occasion but overall it was extremely pleasant. Even more so that you could perfectly hear the dictation which was very comic book style lingo along side of the action. Well done Marvel and Feld!

Parents don’t fret as the treats while sightly higher than what you may want to pay are still reasonable in comparison to many. Just look at the awesome ray guys we brought back to the boys. Lots of fun for $20 each. Score on for the good mom!

Overall, I will say this is the must show this year for families, superhero fans, Marvel lovers and comic book turned big fans!

For a complete list of tour dates, visit the Marvel Universe LIVE! website (http://www.marveluniverselive.com) and stay current on the latest developments through social media, including: