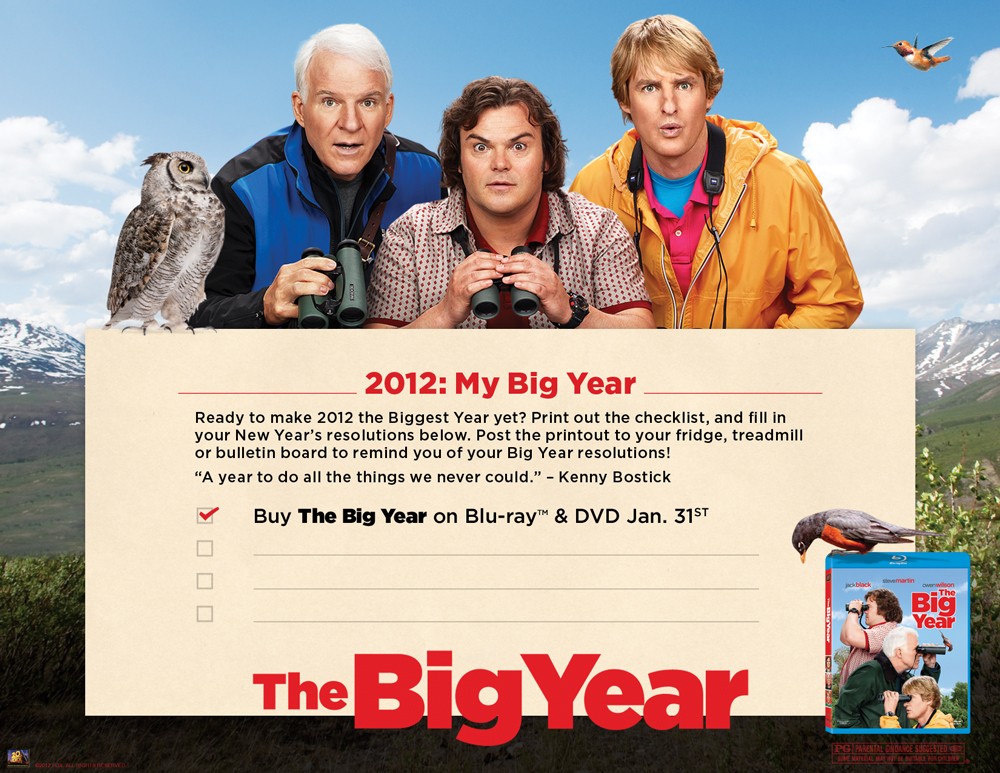 WHEN IT COMES TO COMEDY…

NO GAME NO FOWL 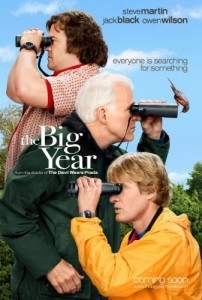 Let the fowl play begin!  Twentieth Century Fox Home Entertainment presents the story of a competitive trio who quickly turn a simple quest into the ultimate competition when THE BIG YEAR spreads its wings on Blu-ray and DVD January 31.

Steve Martin, Jack Black and Owen Wilson portray three men from very different walks of life, facing a mid-life crisis, a work-life crisis and a no-life crisis.  In the biggest competition of their lives, they undertake an unforgettable trek through North America, engaging in hilarious and bizarre adventures and forming friendships that will last a lifetime!

Directed by David Frankel (The Devil Wears Prada, Marley & Me) and featuring outrageous supporting performances from Joel McHale (“Community”), Jim Parsons (“The Big Bang Theory”), Angelica Huston (50/50), Dianne Wiest (“In Treatment”),Brian Dennehy (The Next Three Days), Rashida Jones (“Parks and Recreation”), Kevin Pollak (Red State) and Anthony Anderson (Scream 4), THE BIG YEAR Blu-ray is loaded with special features including the theatrical and extended editions of the film, over 40 minutes of deleted scenes and the featurette “The Big Migration.”  The Blu-ray combo pack and single-disc DVD will be available for an average retail price of $29.99 and $19.99 respectively.  Prebook is January 4, 2012.

Nozzle Theft and Other Newscasters

Twentieth Century Fox Home Entertainment, LLC (TCFHE) is a recognized global industry leader and a subsidiary of Twentieth Century Fox Film Corporation, a News Corporation company. Representing 75 years of innovative and award-winning filmmaking from Twentieth Century Fox, TCFHE is the worldwide marketing, sales and distribution company for all Fox film and television programming, acquisitions and original productions on DVD, Blu-ray Disc Digital Copy, Video On Demand and Digital Download. The company also releases all products globally for MGM Home Entertainment. Each year TCFHE introduces hundreds of new and newly enhanced products, which it services to retail outlets from mass merchants and warehouse clubs to specialty stores and e-commerce throughout the world.

Disclosure: Feature provided in efforts to assist in the promotion of the upcoming release of The Big Year on Bluray and DVD. My opinions are my own and may differ from those of your own. I am disclosing this in accordance with the Federal Trade Commission’s 16 CFR, Part 255: “Guides Concerning the Use of Endorsements and Testimonials in Advertising.” Please view our disclosure policy if you have any questions.