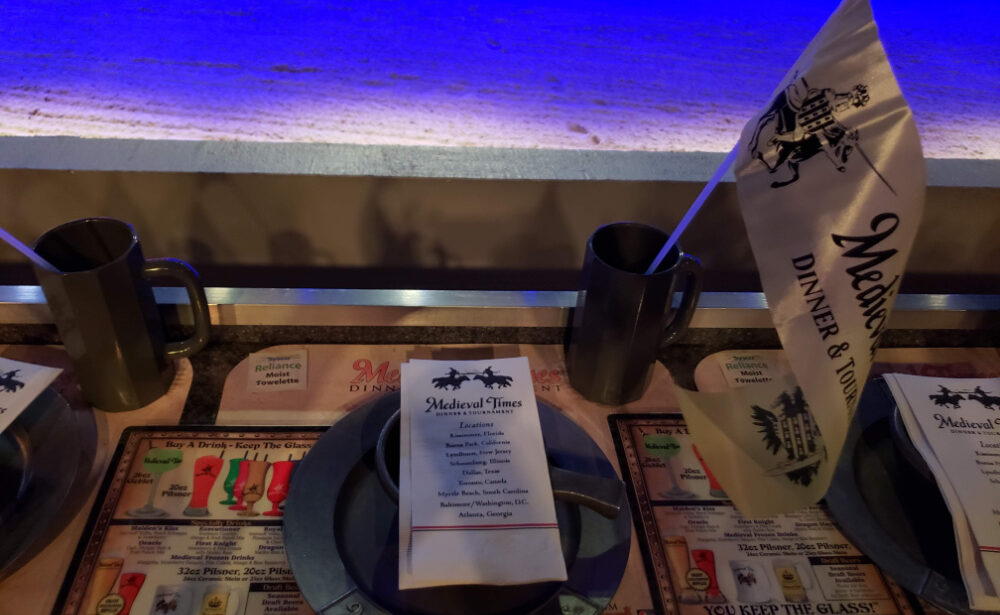 Have you ever wonder what it would be like to watch valiant knights compete for their honor and the queen’s favor. Cheering them on from the sidelines as their weapons clash with a shower of sparks, showing off their strength for you to see. All while you eat a feast consisting of roast chicken, tomato soup, garlic bread, sweet buttered corn, dessert of the castle, and two rounds of coffee with non-alcoholic beverages, or you can receive a vegetarian meal if you request. Truly a meal fit for any king or queen. Then, Medieval Times is the place to be!

Watch as history plays out in front of you. Cheer for your favored knight during the Medieval Times Dinner Theater Show. The humble, loyal, and invincible black and white knight. The unquestionable master of weapons and the temper of the dragon’s claw the green knight. The free chivalrous lion the yellow knight. The lions heart the red knight. The lance-wielding yellow and red knight. The last but not least, the chosen champion of the defenseless the blue knight. No matter who you chose to call on in battle they all put on quite the show.

See the riders joust on top of their steeds at breakneck speeds. Clash together in battle with their swords, maces, lances, halberds, and their protective armor to continue the fight in the queen’s name. Experience the graceful flight of the royal falcon. Witness their mastery in horsemanship on top of their stallions and mares. As the tension rises, the knights show their true strength. They rise to every challenge for their pride, and for a place as the queens champion.

After each section of challenges, the knights will ride around the arena on their noble steeds and gift a beautiful rose out to the purest maidens. Not only do you get to watch such a dazzling display of strength while feasting, you can sit close to the queen with a VIP pass. Wearing a golden yellow crown upon your head. You can be knighted by the queen herself, or even join the ranks of nobility. Then have your royalty declared for all to hear as you smile for the camera. Something to remember the amazing experience. Even after the show is over doesn’t mean the amazement is. The merchandise is something truly jaw-dropping. You can by your own glowing rose to your very own stainless steel dull dragon dagger.

Every show is something that never gets boring no matter how many times you go. Its the type of show that you can’t predict and that is something to be dazzled by. Even the price for everything even if you got the VIP pass is lower than many other options. So not only are you getting a historic show you’ve never seen anything like it before with a great feast. It’s an affordable things to do in Orlando experience too! So go on down to Medieval Times for a show you’ll never forget. Enjoy a large filling feast and a glowing rose alongside your steel dragon dagger.