The iTikes Map inspires passion for learning with real-world subjects and kid-friendly App content. With or without a device, kids can learn about dinosaurs, animals, the Solar System and more. With the App the learning expands with 3D interactive images, and animated facts. All the maps are augmented reality enabled adding an extra dimension of learning and excitement. 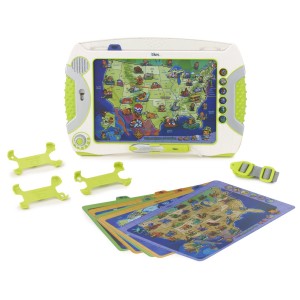 For the modern parent, handing your tot your smartphone or iPod Touch is just another day in our life. Before Elliot was two he was playing handheld gaming units. While some may do the wrinkled noise at that comment, it is just a fact of our everyday growing lives. Things are becoming more digital including our children. What it is important to remember is to make those electronic usage times as educational as they are fun.

The iTikes Map Explorer is around the size of a doodle pro and is around 2 pounds. This seems to be a pretty good size for my nearly three year old son. He can hold the grips on the sides with no issues, carrying it wherever whenever he wishes. Don’t confuse iTikes with iTough as the iTikes is still breakable in some since. Meaning you wouldn’t see me allowing it to go rolling down the stairs. Just like with any use of electronics, adult supervision is always suggested.

While caution is suggestion in careful handling the capabilities are amazing. The iTikes Map Explorer comes with 6 maps including: dinosaurs, world facts, music, solar system, world cats and world dogs. Right now my little guy is most interested in the solar system, especially the moon and sun. We are slowly working into the world facts and dinosaurs. While he shows interest; it is a little harder for him to understand and remember. Not to worry though as soon as it peeks his interest, Elliot will be digging his heels in. However the solar system map and interaction with the iPod Touch was enough to sell me.

Each map when in use allows your child to click on specific points to learn more about that area or animal. Again with six different maps you get hours of educational fun. As your child ages, there are also games that they can play while of course learning along the way.

It is also important to know that the iTikes Map works with or without the Apple device. So even if you do not own an iPhone or iPad Touch your child can still enjoy all the fun each map offers. Though for those of us who choice to allow use of our smartdevice, the iTikes app is free. 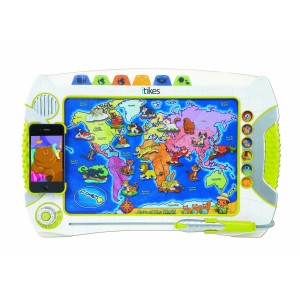 One lucky reader will receive a iTikes Map Explorer!

Giveaway ends December 26th at 11:59pm, open to US residents, ages 18+. To enter please use the Rafflecopter form below. Good luck.

Disclosure: I receive sample(s) from for purpose of testing and review. My opinions are my own and may differ from those of your own. I am disclosing this in accordance with the Federal Trade Commission’s 16 CFR, Part 255: “Guides Concerning the Use of Endorsements and Testimonials in Advertising.” Please view our disclosure policy if you have any questions. Mom to Bed by 8 is not responsible for sponsor who do not fulfill prize shipments. However we will make several attempts to ensure this does not happen.