When you call a film something like Epic, you’re usually creating for yourself quite large expectations to live up to. With this film coming out this summer, will Blue Sky Studios’ latest CGI offering live up to the promise?

If the trailer is anything to go by, Epic certainly has a strong chance. The trailer itself is rather lively, offering plenty of scope. It should be no surprise that the attention to detail in the CGI is breathtaking. Blue Sky Studios also produced the likes of Rio and Ice Age; both CGI films with plenty of voiceover talent adding depth and detail to the beautifully created environments. 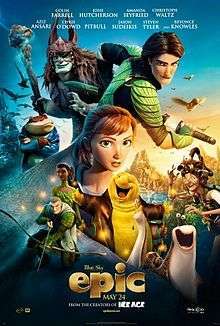 Like Ice Age and Rio before it, Epic is also a family-friendly film. Yet that doesn’t mean it’s just for kids. People of all ages can enjoy a film like Epic; it’s just one of those films that seems to have just the right balance of silly and fantasy about it, yet still offers a gripping plot. As such, it seems to appeal to a much broader fan base. At the very least, this should make it easier to find someone to go with if you’re not going with the family.

More than just Blue Sky Studios, there seems to be plenty of talent behind this latest film. Amanda Seyfried plays the lead role of Mary, but she’s not the only big name attached to the title. Indeed, Epic also boasts talent including Colin Farrell, Beyonce Knowles and Josh Hutcherson. Combined with the high quality animation, this further adds to Epic’s potential.

The film is also directed by Chris Wedge, the director of Ice Age. Wedge knows how to work CGI, and how to get the best laughs out of any scene. With all this going on, Epic is certainly something to watch out for.

Is this something you would be interested in? You’ll find out when Epic opens later in May this year.