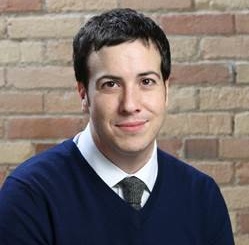 It’s wonderful to see more shows encouraging children to embrace their curiosity and discover science.  Especially when the scientist in the spotlight happens to be an awesome little girl.  One look at my Pinterest boards, and it’s not a surprise that I’m huge on Steampunk culture and science fiction, so a show that brings some elements of both is more than welcome in our home.  Annedroids

is one of the new children’s shows that will be streamed exclusively on Amazon, joining other children’s shows we’ve recently talked about here on Mom to Bed by 8.  The creator, JJ Johnson, took some time to sit down with me and talk about the new show and what we can expect.

Brooke: I wanted to talk to you about the new show, Annedroids.  Could you tell us a little bit about it?

JJ Johnson: Sure!  So Annedroids is a series that follows a kid scientist, a little girl named Anne, and she builds androids to help her out with her science experiments.  It takes place over twenty six episodes.  Anne lives in a junkyard with her dad and basically it’s a character that’s really content to be on her own doing science with friends that she’s literally made out of spare parts.  In our first episode two kids from the neighborhood kind of break in and discover her and over the course of the twenty six episodes we kind of watch as Anne gets them excited about science while they kind of get her excited about the outside world.

Brooke: I actually watched the pilot episode with both of my boys this morning and they are just huge into science and science fiction.  We’re a “Star Trek” family, so they want a workshop in the back yard now.

JJ Johnson: Awesome.  They enjoyed it then?

Brooke: Yes, very much.  Was there any inspiration for the show’s location?  Like the neighborhood and the junkyard itself?

JJ Johnson: I’ve always loved a kind of steam punk aesthetic and couldn’t figure out a way to get it into a show. You know junkyards are just so, and as a kid I used to go into junkyards and look around, they’re just this kind of hodgepodge of crazy materials like things from all over.  So I’ve always wanted to do a junkyard show.

And then in terms of the neighborhood, I grew up in kind of a lower-middle income environment and you just don’t see that on TV.  Everything you see are kind of mansions or kids at school on a cruise ship or something.  I really wanted to show an environment that’s true and real to what I think most kids out there are living.  And then to present inspirational characters that are characters you can actually aspire to legitimately become.  You can become a scientist, an inventor, a creator.  We’re not a big fan of putting out shows that just show people becoming superstars.

Brooke: I’ve seen a little bit of conflicting information.  I watched this with a four and six year old who both did great with it, but a couple different websites have given different age ranges for it.  In your opinion, what age range would you say this is appropriate for or targeted at?

JJ Johnson: Truthfully, we make all of our stuff for families.  I think if you’re really dealing with socio-emotionally learning and you’re talking about sharing or you’re dealing with hardcore curriculum math then you can start to say ‘well this is geared toward four or five year olds’.  We’re just trying to get kids to be excited about science so in these episodes I think you’ll notice that we’re not trying to take you through the A’s, B’s, and C’s of how android technology works or how lightning works.  We’re just wanting to give cool factoids to get kids excited about that subject and hopefully they’ll go offline and learn some more or go to their parents and say, ‘Oh, I’m really curious about this animal now or space’ because they’ve been excited about something they saw on the show.  I’m hopeful that it’s something that whole families would enjoy watching together.

Brooke: Especially for the parents when they get to the credits and hear ‘Weird Science’.  I think I laughed for about five minutes.

JJ Johnson: Laughs.  That was my favorite.  The fact that we got that song still makes me smile right now.  I mean I love that movie.  It kind of blew my mind as a kid.  A number of movies did, but I’ve just always loved that song so the fact that we were able to get it for the show is thrilling to me.

Brooke: That was amazing.  Now, this show is an Amazon exclusive.  We’ve seen a couple of these shows popping up.  I think that’s an amazing delivery system.  So what has it been like for you, having done things like Dino Dan for TV, to jump into this streamable format for Amazon?

JJ Johnson: Well, I love it.  This is a very tech progressive series, so it just makes sense that it’s on a new network that’s launching.  For me, there’s been so many opportunities like the fact that we can do an arc story line, a season-long story line where we watch these kids’ and these androids’ characters develop over the course of the episodes rather than be stuck sort of in a locked format.

I love that Amazon’s eager to do apps so we’ll be introducing a slate of apps that correspond to each episode.  What we try to do with all of our shows is if a kid gets excited about a certain subject in the show, we want them to be able to explore that in a virtual safe way.  So for any experiment that you see on the show, you’ll be able to play an app a couple weeks from now when we put them all up that lets you do that.  So if you see them mixing chemicals, now you can mix some chemicals and see what happens.  If they’re going into space, now you can mess around and build your own rocket and launch it into space.  I’m just really trying to never stop the adventure and never inhibit a kid’s curiosity.

Brooke: I love how bright of a little girl Anne is.  With this being a big arc, could you give us any sort of idea of what inventions we can expect from her in the first season?

JJ Johnson: So SO many things.  To your point about her character, she’s just one of my favorite role models that we’ve ever worked on.  My favorite thing about her is that she actively likes to fail because it gets her one step closer to finding the right solutions.  She messes around with a lot of things.  In the first episode, what you’ll see is that she helps her friends.  They build a lawn mowing robot together because one of the friends across the street has to finish a chore before he can come over.

And then really they get into some very sophisticated things.  Over the first couple of episodes you’ll see that there’s a rocket launch that goes bad and accidentally hits a pigeon and its wing gets injured, so they decide to build a harrier jet pack for it.  That’s one of my favorite episodes.  You’ll see this awesome space episode where she wants to show her friends a lunar eclipse so they stay up late and they’ve got this observatory that they’ve built on top of this decrepit carousel.  There’s just many kind of weird twists, but we do try to show a sort of grab bag of science.  There are androids and robotics as a core theme.  We also do look at space.  We look at animal science.  We look at any little piece that we think is going to grab this audience’s attention.

JJ Johnson: The first seven episodes are up, so that takes you from meeting Anne and introducing all three androids to her friends, and opening up the junkyard environment, and culminates with meeting Anne’s Dad in episode seven.  I think the next six episodes should be coming up in the Fall.  It just takes us a long time to incorporate the CG animation into live action.  it takes us about six months so we’re desperately trying to race it through, but it’s just going to be a little staggered.

Brooke: Well, I’m looking forward to it!  We’ll keep the readers updated as soon as the next ones go up.

Brooke: Thanks for sitting down with me today!

Annedroids is something I’m going to enjoy watching with the kids.
If you want to check it out, you can watch the pilot episode for free Here