One of the first live shows I ever took my boys to was WWE. While we are not overly huge fans that set the DVR to record, I am a big supporter of the traveling shows. I can remember seeing them in Memphis. Nothing will take away the memories of Junkyard Dog and Jerry Lawler. It is like watching history in the making. With that being said, we do own a few themed toys including action figures and those fun pillow fighters. Though nothing could compare to the fun that Low has had with with the WWE Rumble Fists sent to us for review. 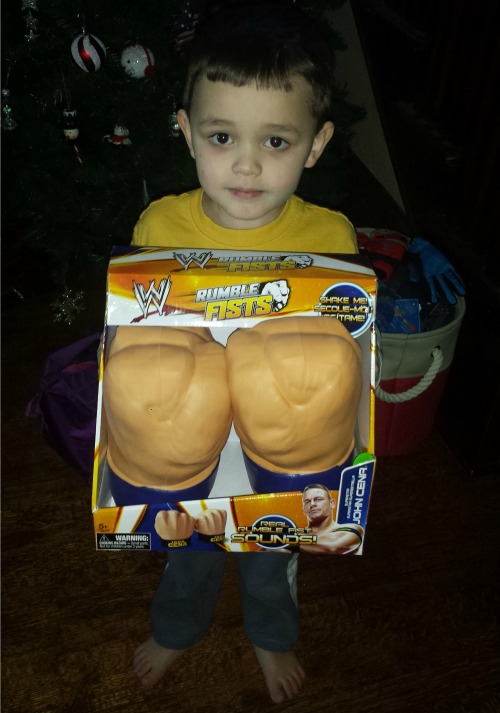 The newest character to be added to the WWE Rumble Fists line is none other than the nation’s favorite wrestler, John Cena. Known as the all American, he brings crowds to every event he attends and even in this case helps sell out toys. Now while the face does help the attractiveness of this product, it is well worth the price tag when you can locate them on the shelves of your local retailer.

The fists themselves are packages in a way that you can not only see but feel the texture before even taking them out of the box. With a few squeezes, we found them to be squishy, comfortable and smooth to the touch. This gives the immediate idea that even when in battle, these don’t really hurt those that are on the opposite side of the fist. Good news is even when opened and in play, this remains true. 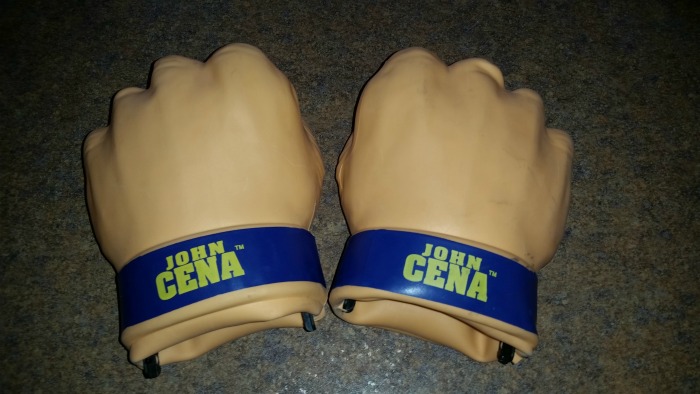 The fists themselves are fairly large, around the size of son’s head. They are not very heavy, so even he could hold them while actively playing without any issues. Low is almost five years old, so I will say the age warning of 5+ is appropriate for this product as well. Especially when you take into consideration they are made for punching (even if only the air).

The WWE Rumble Fists are made to hold in each of your hands. This is done by a plastic bar on the inner part of the product itself. I like that it is easy to get to which is a common issue with products of this type that are made of cloth. My son’s generally find it hard to grab a hold of the fist and even remove their hand. With this style, both of those problems have been resolved. 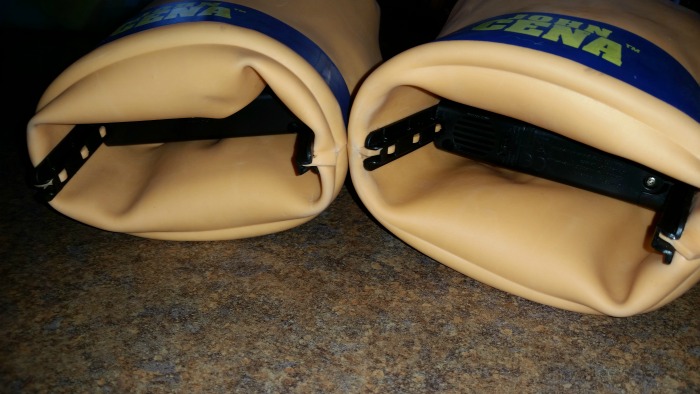 While I like the hold design, it does have a downside. In the event, you or your child pull the black hand holder out of the fist, it will never really work properly again. In our case, my boys were play fighting and one went to fall back and yanked the other one’s fist off. Since he was holding the unit, it pulled inside out; essentially ripping the pieces that hold it all together. Honestly though, that was in rougher play mode and not an everyday occurrence. So for the most part, this is not something you would ever need to be concerned about. 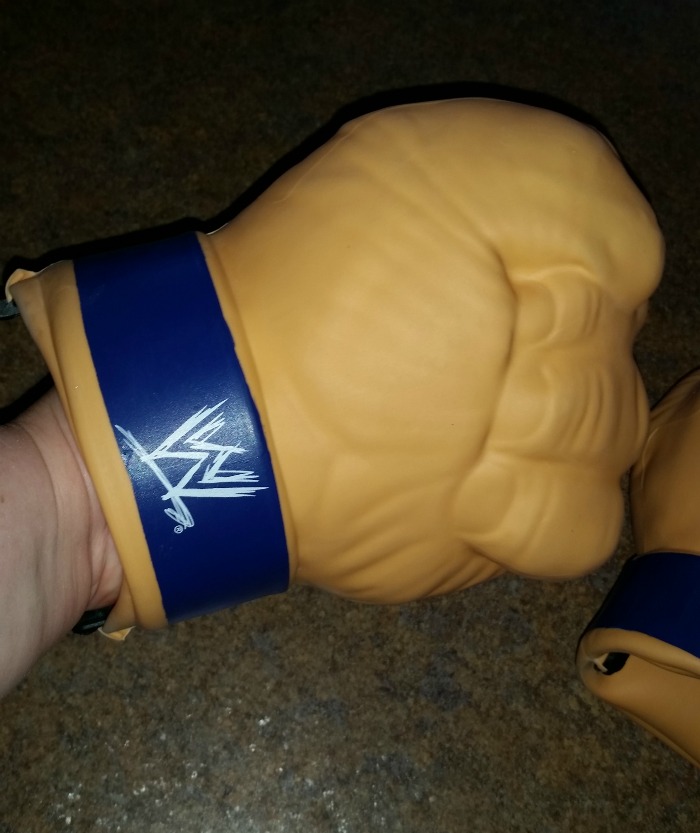 Another bonus to the hand bar is that it is ideally designed for the ages stated. As you can see above my adult hand fit but the wrist was sticking out. The fists however covered both my 4 and 8 year old son’s hand from fingers to wrist.

When turned on, you will hear the audience cheer and the bell ring. Then when in punching playmode, there are a variety of punching sounds that come from one fist. I appreciate that no lingo was added as I think that tends to be overrated and the action sounds are just enough for the WWE Rumble Fists. 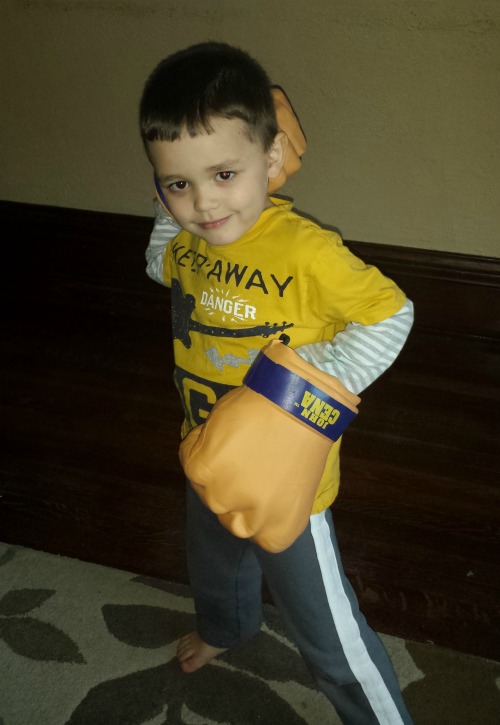 So no matter if you have a die hard WWE fan or just a little boy looking to have a little wrestling fun, I agree that the WWE Rumble Fists, John Cena are a hit. They have been played with several times over the last two weeks and remain in the most grabbed after toybox downstairs.

Note: The packaging is not idea for the holiday wrapping season but by putting them in a box before hand would help this issue or even going with the easy bag gift method. However the WWE Rumble Fists would make an excellent edition to Santa’s big red bag. 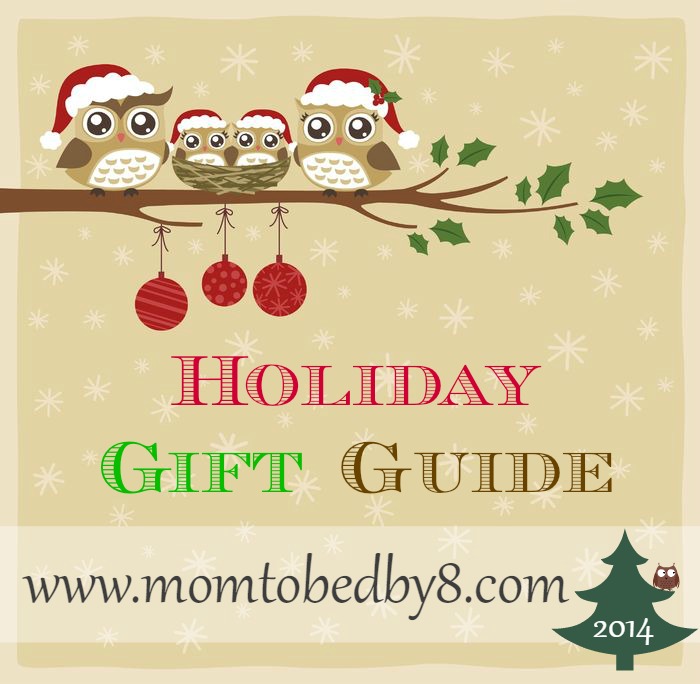 Disclosure: All opinions seen in this publication are those of the writer and may differ from your own. MomtoBedby8.com may have receive product or payment as a condition of this publication. No purchase necessary. Void where prohibited by law. Sponsor is responsible for prize fulfillment and shipment to the winner. This sweepstakes is in no way associated with, sponsored, administered or endorsed by Facebook, Twitter, Google, Pinterest or any other social media network. For questions or to have your product featured on Mom to Bed by 8, email Teri at [email protected]