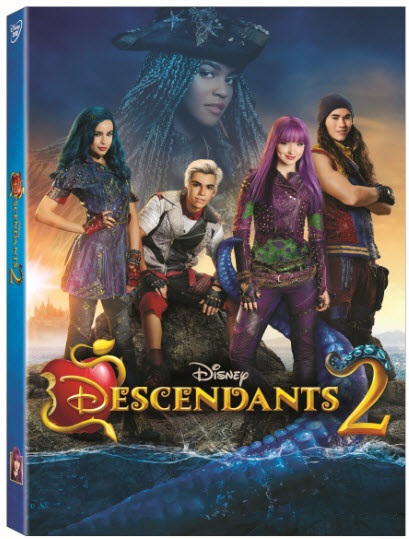 We are a Disney family. Truly, we heart all things Disney from films to collectibles and even theme park visits. Though being in the Midwest, means we only get to enjoy the mass market side of things all year round with a favorite being movie nights with our beloved characters and villains.

As my daughters aged, they began to watch more of the live action Disney films vs the traditional animated. One series that continues to make the top of their watch list is the “Descendants,” which is made up of the teenage sons and daughters of Disney’s most infamous villains, Mal, Evie, Carlos and Jay (also known as Villain Kids or VKs) and now with today’s DVD release of Descendants 2.

The newest of this action packed arena is Descendants 2 where the story deepens in the music-driven sequel focused on the characters trying to find their place in idyllic Auradon. When the pressure to be royally perfect becomes too much for Mal, she returns to her rotten roots on the Isle of the Lost where her archenemy Uma, the daughter of Ursula, has taken her spot as self-proclaimed queen of the run-down town. Uma, still resentful over not being selected by Ben to go to Auradon Prep with the other Villain Kids, stirs her pirate gang including Captain Hook’s son Harry and Gaston’s son Gil, to break the barrier between the Isle of the Lost and Auradon, and unleash all the villains imprisoned on the Isle, once and for all.

Descendants 2 is now available on DVD. Get yours today at local retailers like Target and Walmart or online at Amazon.com. Bonus – Visit DisneyMovieRewards.com and enter to win a Disney Channel 5-movie collection including “Descendants” and “Descendants 2”!